We are climbing An Sgùrr, the mountain that dominates the inner Hebridean island of Eigg. We’re there for a music festival, organised out of the ashes of the fence collective. It’s high summer, and the weather is distinctly un-Scottish.

Up ahead is a hesitant couple, figuring out the best way to the top. They’re standing at the crossroads, as it were. We play the role of the devil and point them in the right direction. It comes at a cost. They have to talk to us.

Appropriately enough, it turns out they’re musicians. Well, one of them. Nan, from Ireland. Swapped, briefly, with a gypsy child at birth and given a traditional gypsy charm song that she feels has helped her journey along ever since. She’s a folk singer, and later, after we’ve been up the mountain and back, and a few more days have passed, she sings us old songs in front of the fire outside the cèilidh hall in the early morning.

Fast forward, to late autumn. Nan is singing with her band, Cluasóg, at a North London venue. We, the friends of Eigg, are there as a reunion, thanks to Kelly’s remarkable memory for a face and a name leading us to a gig casually mentioned many months before.

She comes on stage. It’s like Tetris getting the whole band on there. With fiddle, harp and flute, we hear songs of lost love, of failure, of emigration and of infanticide. Nan sings beautifully, and often in Gaelic. The gypsy charm has served her well.

After the show, we corner Nan, to say hello. She clearly has no idea who we are. To upstage embarrassment, I mention Eigg.

We don’t know anyone called Anna. She has forgotten us.

The conversation goes fine anyway. We learn she has split from the man she was with on the mountain. He’s working in Hong Kong. Meanwhile her heart belongs to Eigg. She’ll be there for Hogmanay (“you should come!”), and is house sitting for two weeks in November. Just her, surrounded by her thoughts and her instruments. She’s moving to Glasgow soon, to be nearer to it all.

Someone she knows a bit better than us calls her over, and she leaves without saying goodbye. But you know, the above isn’t intended to be a moan, just a note on relative memory. Nan is pretty damn great. We’ll just have to make more of an impression next time. 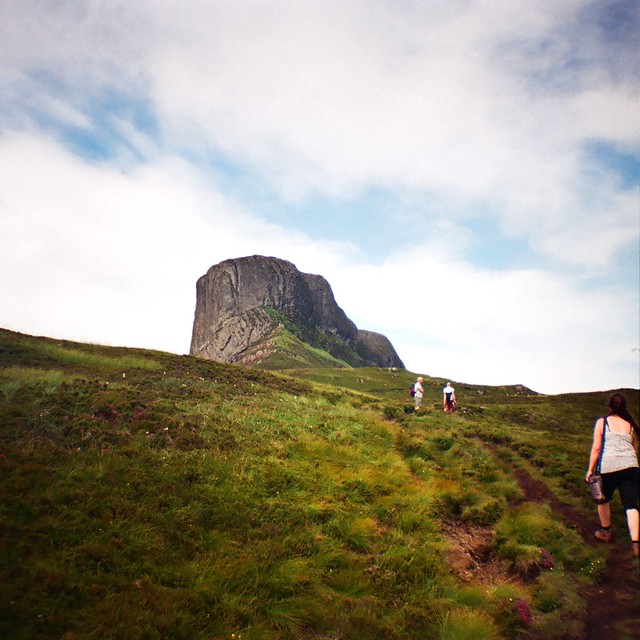