Sometimes good places, you don’t want to tell others about it

An intriguing if slightly counter-intuitive introduction to Kita Otsuka Ramen, a tiny neighbourhood restaurant in Sugamo, Tokyo. This write-up was from the owner of the apartment we were renting. I thought of the mystical Neko Ramen in Tatami Galaxy, and ramen’s special place in japanese culture generally. Surely these words were heartfelt. Clearly we had to go.

Yuki did some googling, and said the place was pretty popular, and we’d have to queue. I was incredulous. On a rainy Monday lunchtime in the middle of a residential distict? Surely not.

Wrong again. We arrived to the tiny premises, on an unremarkable street opposite a huge, ugly apartment block, to find six men standing in front of us. There was just over 40 minutes to go til the end of lunchtime opening hours. Shortly after we arrived, the proprietress came out to tell us they were running low on soup, and handed Yuki a sign telling her so. This confused us. Did Yuki’s possession of the sign act as a warning that we may not acquire ramen that day, or – an uplift of optimism – that we were the last customers who would be served?

It was the latter. The sign had an immediate effect on those arriving after us: one sumimasen from Yuki, a glance at the symbols, and they left, thanking her for the information. They seemed pretty stoic about their unsated fate, but I suppose they were locals. There’d be other opportunities.

We shuffled forwards. Yuki peered inside. There were seven counter stools,  arranged along two sides of the ramen preparation area. There was a large metal cauldron, that had clearly seen many years’ worth of work. This was encouraging.

We made it inside, and the proprietress – in her late sixties, I would guess – immediately put a sign outside to deter further customers. As is customary, there was a machine with which you make and pay for your order, then handing your ticket to the staff. Who, in this case, were just two: the sign-wielding lady, and her grey moustached, ramen-wielding husband.

Two stools became available, and we squeezed in at the end of the row. Ramen excitement was now high. I was still slightly worried that they’d turn around and go, sorry. All the soup is gone. Go away. Instead, the lady came to hand Yuki her ¥550 back: her ramen was on the house, as thanks for her sign-holding efforts.

And then the ramen arrived.﻿﻿﻿ 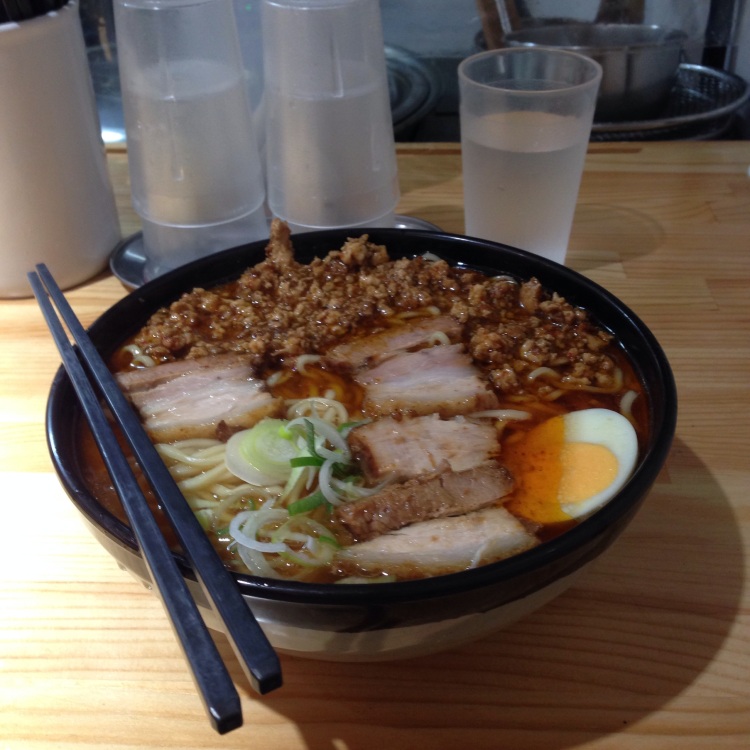 Sometimes good places, you want to tell others about it.