“Don’t you have to have a US passport to go on this tour?”

It’s a Saturday morning in May and my associate Euan and I are at Seoul’s endearing postwar barrack of the USO, “home away from home” for US troops, ready for our trip into that strange strip of land between North and South Korea, the demilitarized zone or DMZ. It’s a touristic day out to the place where the Cold War never ended. 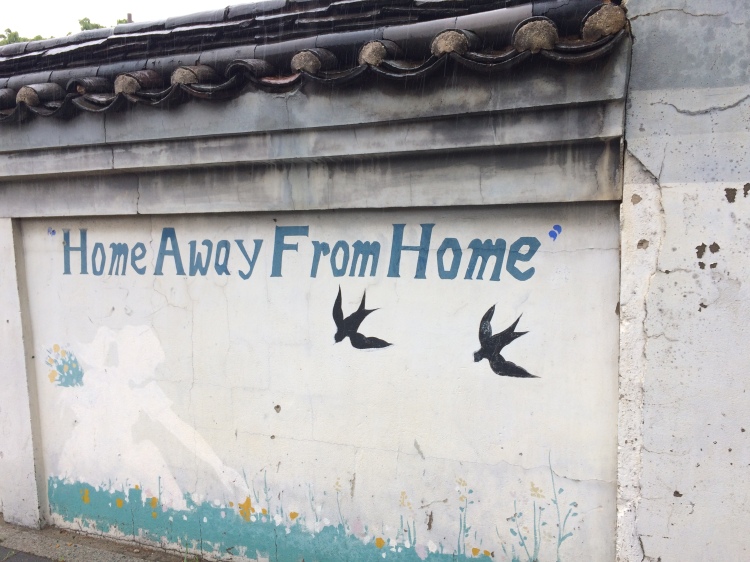 Our trip had initially involved a visit to the Joint Security Area (JSA), in Panmunjom, the “Truce Village”, where the Korean Armistice Agreement was signed and where the leaders of South and North Korea recently met. But shortly before our visit, we find that this, the most interesting portion of the tour, has been cancelled by the United Nations Command Military Armistice Commission as rumours swirled that Donald Trump wanted to meet Kim Jong-Un there too. By the time we returned to England, this proposed meeting had been moved to Singapore, cancelled, rearranged, and is currently unfolding as a Paul Verhoeven scripted satirical nightmare.

After waiting in the USO reception surrounded by fellow tourers dressed in a variety of baseball caps, a huge TV blaring out golf, and slightly misleading posters about the Korean War, we are ushered outside for our coach to the DMZ. We have a Korean tour guide, who introduces herself as we head off along Seoul’s mega-highways.

“I can’t understand her”, the man behind me loudly complains. Sigh.

We are given a potted history of the past century, starting with the Japanese occupation of Korea, not much on the Soviet-Japanese war, and then the division of the peninsula, which is explained thus:

The north was taken over by the Soviet Union, which is communist country, and the south was with the United States, which is democratic country.

Which is, you know, like… oh anyway. Moving on.

Our expressway hits the barbed wire coast. We gaze at checkpoints along the sea while arguing pointlessly about the British royal family.

We slow as we approach the border area. We pass a sinister abandoned fairground, lonely and shut in the morning rain.

We reach a coach park. Behind us, an enormous and recently constructed mall, with rooftop viewing platform for those wanting to gaze over the Imjin river. We are in Imjingak, 7 km from the Military Demarcation Line . I discover there is a *spectacularly twee* train that heads over this bridge carrying passengers up to Dorasan, the last station before the border, but sadly our tour does not involve riding it.

We see Imjingak’s main attractions: a commemoration statue with muzak, a commemoration bell, the remains of a train that was attacked during the war, and the bridge of freedom, used by repatriated soldiers returning from the north.

We now have almost fifteen minutes to kill before getting back on the coach, so we visit the big old tourist centre, where DMZ tat and iced coffee is on sale. “It’s kinda hilarious there’s a Popeyes,” says Euan. 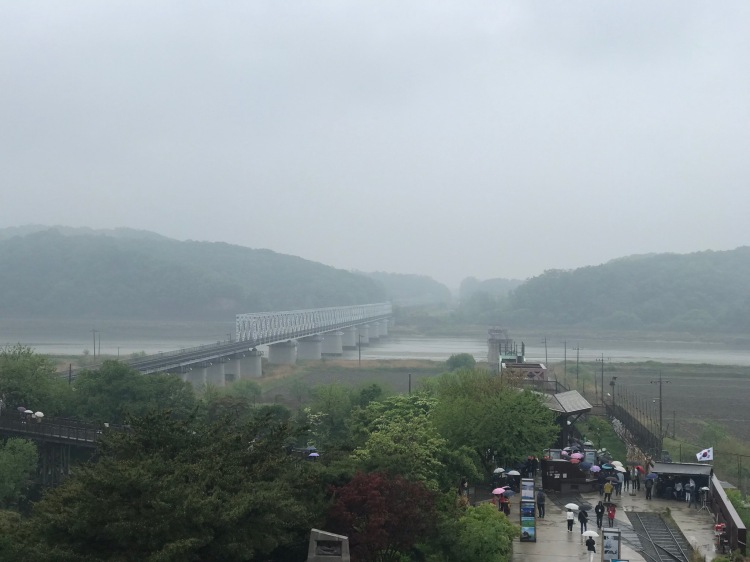 Drinks purchased, we pile back on the coach to be driven to the third infiltration tunnel, one of four tunnels dug by the north under the border that the south has thus far found. On the way, our tour guide tells us a winning story about the founder of Hyundai, Chung Ju-yung. “He had a dream to become a millionaire but North Korea was communist so he stole his family’s cow and escaped to South Korea”.

“Then, in the 1990s, he sent thousands of cows to the north in a spirit of reconciliation and in memory of that first cow”.

It seems that this tale is not entirely true. While Chung Ju-yung was born in the north of the country, and did sell one of his father’s cows to get an early business started, Chung was already very much established in Seoul when the Korean War began. In fact, he fled to Busan, in the far south of the country, as the North Koreans attacked and captured the capital.

He did genuinely drive 500 cattle over to the north in the nineties, though.

Before we get to see the “third tunnel of aggression”, we are herded out into the rain to be told we have to watch a movie about the tunnels first. This can’t be good, I thought. “I don’t want to watch the movie,” I complained.

So into the auditorium we shuffle. The video is so ridiculously over the top that several people laugh.

Then in a dramatic change in tone, we discover that the DMZ is now a paradise for moose and herons. “The DMZ is a land of life”,  we learn. “The miracles of the DMZ… will heighten our security awareness and give us the opportunity to commune with nature.”

It’s basically a pre-Trump version of this.

There are a lot of obese US army soldiers puffing their way down the tunnel when we do finally enter (no phones: these are to be locked away in a little locker). There are so many tourists queuing that the whole experiences is fairly claustraphobic, as the ceiling gets lower and lower and tall people like me have to attempt a kind of marathon limbo walk.

Getting to the end there is barbed wire and a little window: we’re only 100m from North Korea. Back in the day a soldier from each side would stand silent guard: now there are t-shirts celebrating this fact. 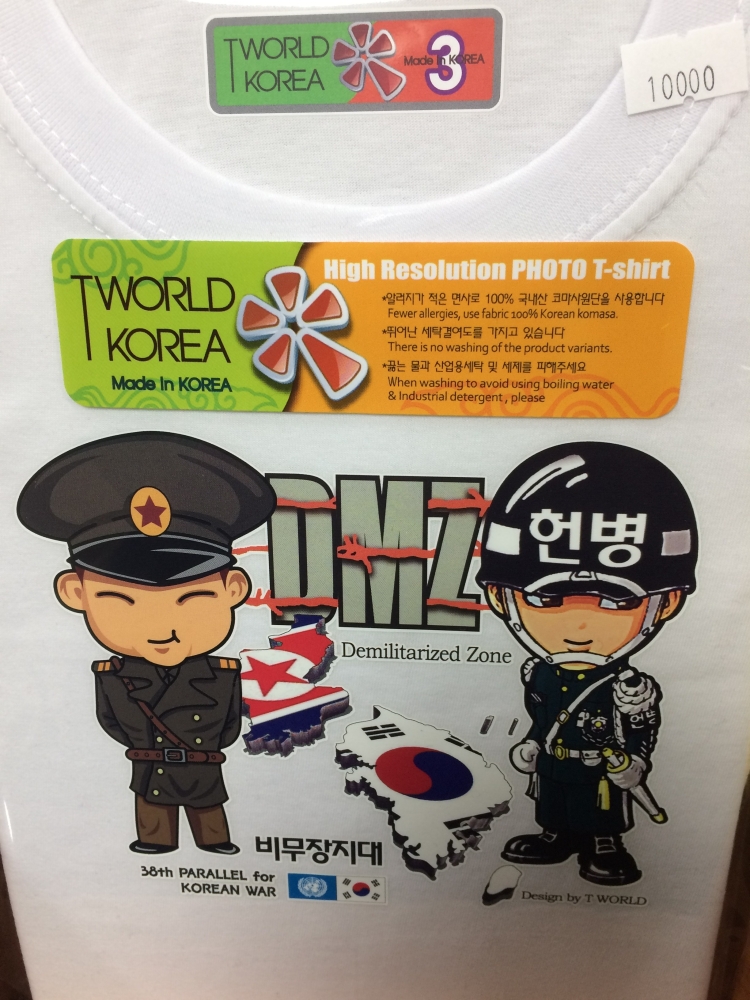 Next up, following lunch, is Dorasan Station, which is huge, impressive and largely symbolic. There are only a couple of trains per day to Seoul and back, largely for the use of tourists who haven’t been corralled onto coaches. There used to be goods trains passing through here on their way to the Kaesong Industrial Region, an experimental collaborative factory zone in the North at which tens of thousands of DPRK citizens provided cheap Labour for Southern companies in exchange for much-needed foreign currency (not that they themselves would have seen much of it). Our guide said the main reason this zone got shut down was due to the killing of a South Korean tourist in the Mount Kumgang Tourist Region, but it seems there’s been activity more recently than that, and a series of closures and reopenings depending on the political mood.

I found the station unexpectedly moving. There was a map in the ticket hall showing how the line could theoretically allow for journeys all the way to Europe, via China or Russia, in the event of a unified Korea. If that ever came to pass, this place would become like Stratford International, a sleepy if enormous monument to a previous age. 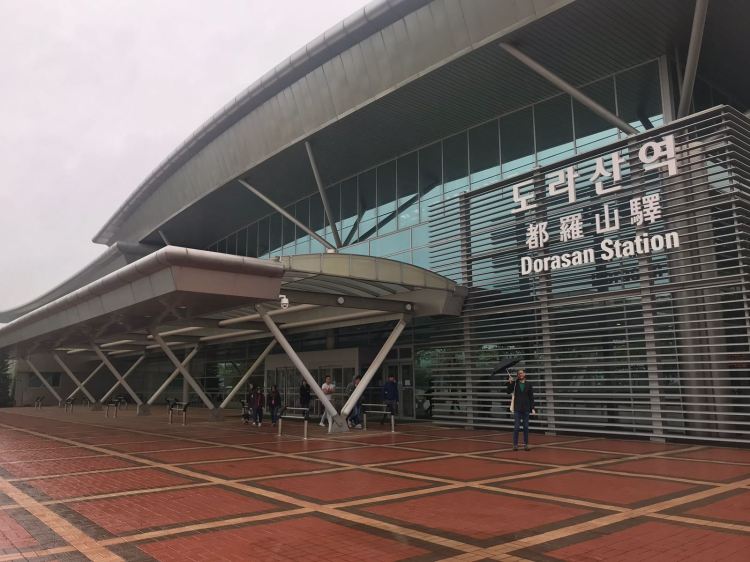 Our final stop was the Dora Observatory, situated on top of Mount Dora and allowing a glimpse into the North Korean side of the border. We were also treated to yet another propaganda video about “the front line of freedom and democracy”, in which it was explained that “we are the true patriots of the world” 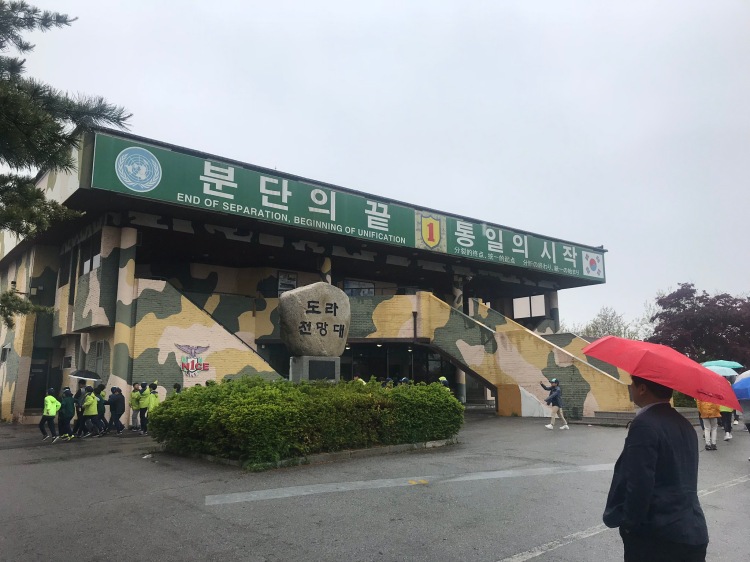 The weather had not improved, so we were reduced to staring out into the rain, occasionally glimpsing a light flicking in the gloom from the direction of what we were assured was a North Korean propaganda village.

But in a way, it was fitting that our glimpse of the North was couched in mist. The intensely organised and rapidly developing tourism on the south side of the border stands in stark contrast to the unknowable and horrible north, and now makes me think about how the grim crimes of its regime are being underplayed by a US President seemingly thrilled at the idea of building condos, skyscrapers and hotels there.

We gazed out for a while longer. Then Euan says, “let’s keep looking at North Korea and then get souvenirs”.