I set off later than had hoped, after some faffing in Marks and Spencers and a peaceful time cycling around marvelling at how many people were also cycling around.

I saw cargo bikes being used for the transportation of children and other cargo, and can report – anecdotally at least – that Ofo, the bike hire scheme I wrote about for the Guardian last year, is very much being used, though a lot of them are also being abused. The company needs to work harder to mop up the various broken and vandalised machines that litter the streets and block the parking stands. 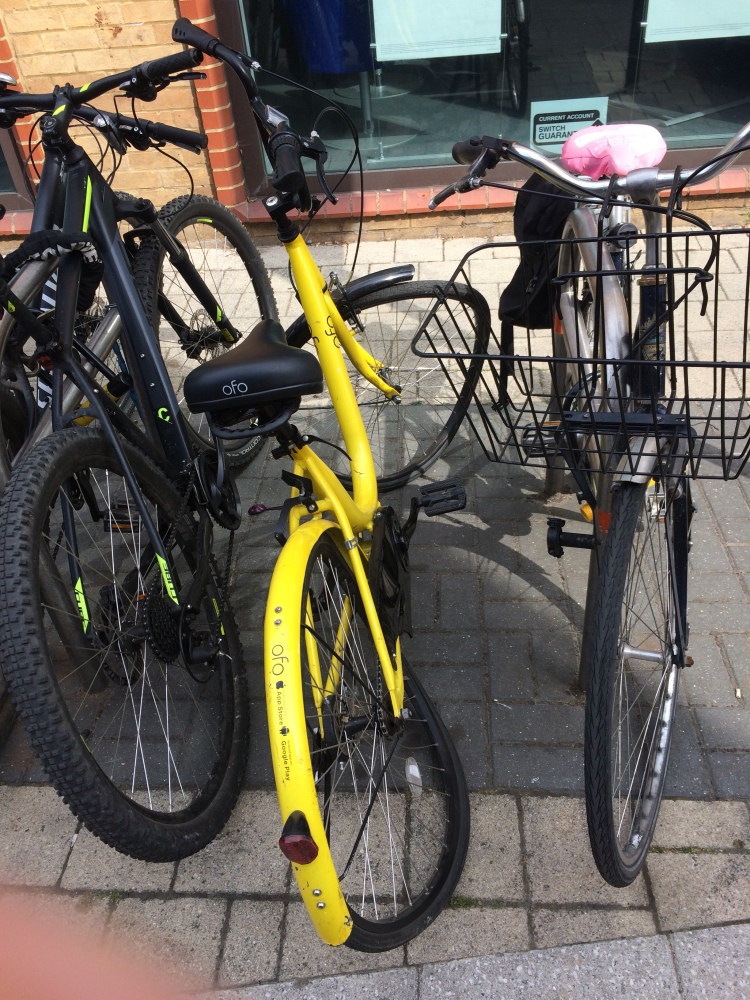 My route out into the fens was along the Cambridgeshire Guided Busway, the longest guided busway in the world. Take that, O-Bahn Busway in Adelaide.

I left the busway and crossed the Great Ouse at Earith, and saw a dead badger being consumed by a cloud of flies. Then I headed north towards Chatteris.

I was tremendously excited to be visiting Chatteris, as I’ve heard it’s envy of the fens and has prick barriers at both ends. But what’s Chatteris if you’re not there? Mildly disappointing, as it happens.

I found one of the good butchers but the lack of a first class cake shop meant that I didn’t linger. 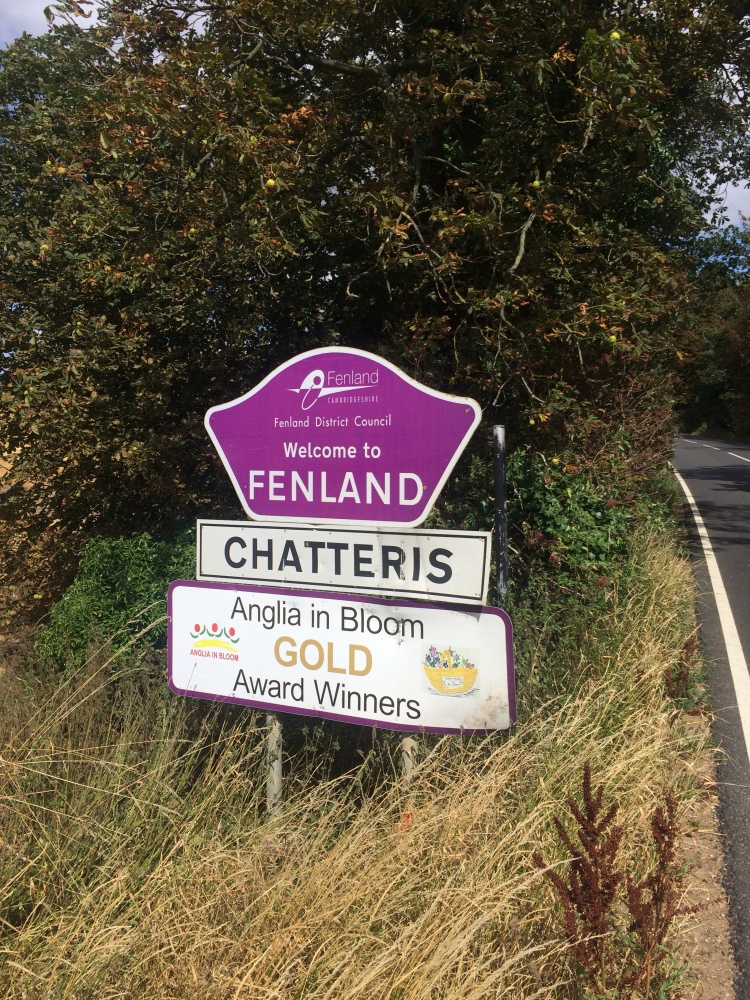 This was proper big-sky fenland: open fields, very straight roads often leading alongside irrigation channels, and not much else to distract one from one’s own internal thoughts and meanderings. For half an hour I got the guitar solo from Pink Floyd’s Comfortably Numb stuck in my head, which was surprising because 1970s guitar solos usually accompany me up hills. And there was nary a hill to be seen.

I had lunch in Whittlesey, which had a wetherspoons on the market square and was dangerously close to Peterborough. For the next, oooh, fifteen miles heading north, I was tempted by siren signs cooing at me to turn left and go to Peterborough.

I did not want to go to Peterborough, however, so I ignored them and cycled on, trying to think of another guitar solo.

I went through a village with a large, modern executive mansion with the gatepost spotted with painted busts of Alsatian heads.

I went through the village of Thorney, which had a pretty and distinctive Abbey Church, and tried to think of a pun so I’d remember the place for this blog post. “That’s a thorney issue,” I said to myself, before going back to guitar solos.

Because of the endless flatness of the fens, you spot things from quite a way off and get quite excited about them as a break in the monotony.

I saw Crowland Abbey ages before I knew it was Crowland abbey, and its distinctive tower called to me and make me hope that it was on my route (I’d put myself largely at the mercy of my GPS). Happily, it was. I turned into the road to the village centre just as a murder of crows took off from the telephone wires in front of me.

I took a slight detour to visit the ruined medieval Crowland abbey, where I learned “the story of Croyland Abbey starts in AD 699, when a young man called Guthlac came to a lonely and demon-haunted island amid the wild Fenland. 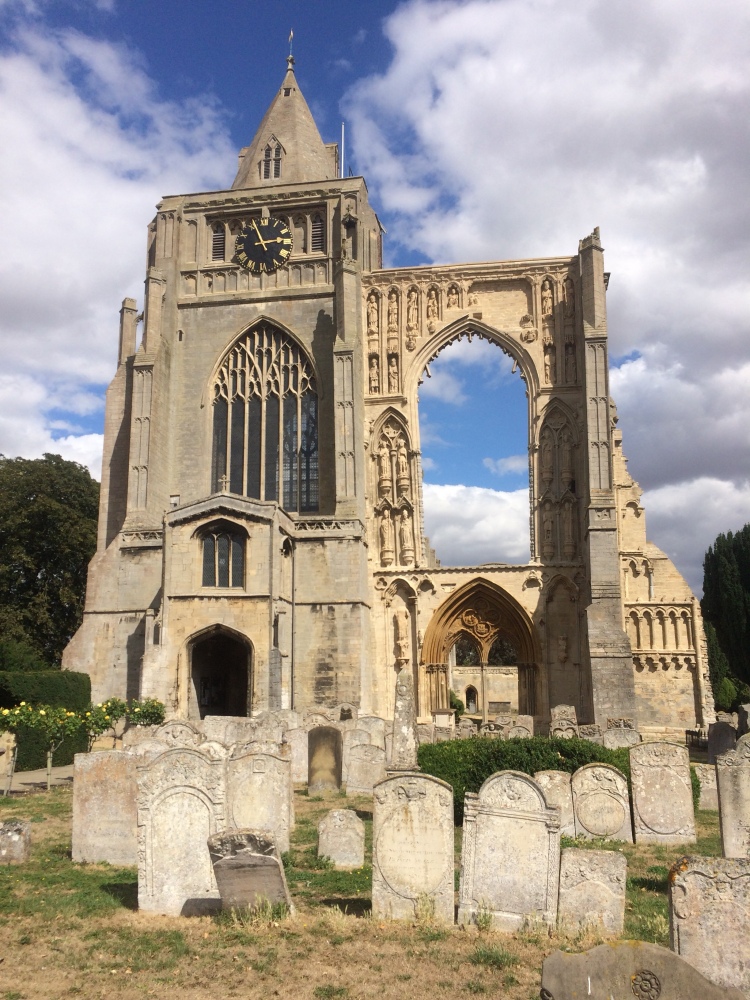 Crowland, the artist formerly known as Croyland, also had a lovely three-sided bridge, the Trinity Bridge, which once formed a crafty medieval solution to the crossing of the River Welland and a tributary, but now it crosses nothing as the rivers have long since moved on. 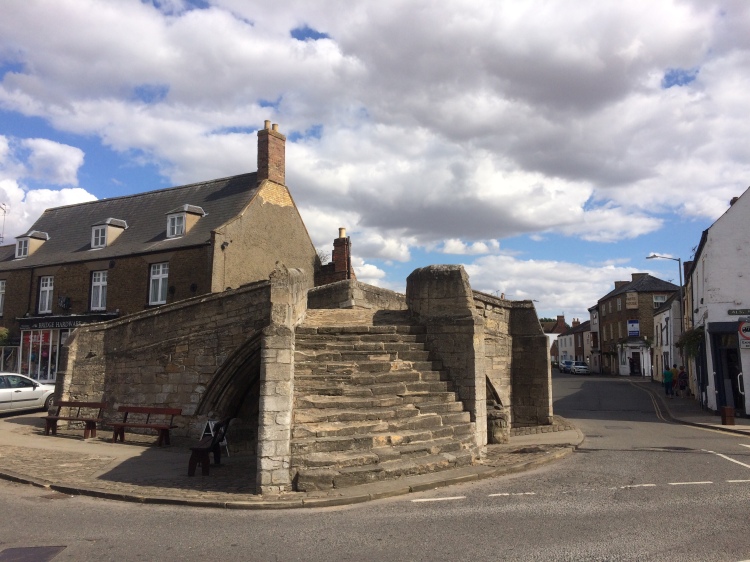 Leaving Crowland, I cycled along a tree-lined avenue before crossing a bridge and heading back east along the River Welland – yes, the one that was supposed to be until the Trinity Bridge – as another murder of crows took off to celebrate my departure.

The river took me to Spalding, which has a rockabilly king and not very many places to sit down. I did finally find a bench outside a chip shop, but by the time I’d faffed with parking my bike a family hungry for chips had already claimed it, sending their youngest inside for the purchase and smiling triumphantly up at me when I turned back to the bench to sit. These were the first people in the Fens I have ever hated on sight.

After Spalding came Pinchbeck, Surfleet, Gosberton, and then heading north east to avoid Quadring Eaudike. Going through Kirton, a village of little interest and far too many cars, and Wyberton brought me to Boston. I was definitely in Lincolnshire now.

Boston has a beautiful church, a confusing port despite being so far inland, and an air of desparation. I took myself around the horrid duel carriageway and got out as quickly as I could.

By this point I was getting quite tired, and also started to worry that my GPS battery was running low, and the paper map of the midlands I’d brought with me as backup inexplicably did not include Skegness.

North of Boston, I headed along a road called Seven Mile Straight, which was seven miles long and very straight. I nearly lost my mind at the tedium of it. I was also getting slightly worried about my GPS, and spend quite a lot of time cursing at blameless villages for not having pubs.

So god bless you Revesby, where the Seven Mile Straight eventually emerges. There was a pub, and therefore electricity, and I took the opportunity to have a break, sup a pint, and charge my electronic map. It was getting late, and I was still almost twenty miles from Chapel, but something joyous was about to occur: hills.

I was inOh to the Lincolnshire Wolds, after 85 miles of eternal flatness. And I flitted through the Wolds until I spotted the lights of Skegness in the gathering gloaming, and arrived in Chapel in complete darkness after a lovely sunset and an unexpectedly emotional cycle ride.