Following swiftly on from the section I did with D and T, I got straight back on my South Downs bullshit, as the kids would put it.

My journey back to the ridge involved a train to Burgess Hill, then a deregulation-tastic £5.90 bus to the Downs village of Bramber. 10p of my change fell from the tray and rolled out of the open doors of the bus. “Watch out, it’s trying to escape,” said the driver. I got off and picked it up, half expecting him to drive off. He didn’t.

I was alone for most of the way, until someone got on and sat directly behind me, in order to have a loud and fascinating conversation about “custody” and “Sergeant Palmer” neglecting his duties. Apparently “the Met” were furious with him and “might have to get involved”. What could it all mean?

My bus deposited me at St Mary’s House, a few metres from the pub where the last walk ended.

A path along the garden lead to the river Adur, offering a useful link back to the Downs way. Also, it was lovely to follow a river for half a mile or so before heaving myself back onto the chalk escarpment.

Rejoining the Way and crossing an unremarkable pedestrian bridge, myself and a cyclist made it across the busy A283 and began the steady climb back onto the chalk hilltop.

The cyclist – I’ve seen more mountain bikers than walkers on the past few sections – scoots ahead but it soon defeats him, and he gets off to push. Passing him and saying hello, he says “this is the first time I’ve had to walk this bit. I’m getting old.”

With thoughts of mortality echoing around my brain, I walk unnecessarily quickly up to the top of Beeding Hill, where I am rewarded with great views of the Adur valley and the villages of Upper Beeding, Bramber et al. Behind me, I can still see Chanctonbury Ring, looming malevolently atop the otherwise bare, exposed hilltop. 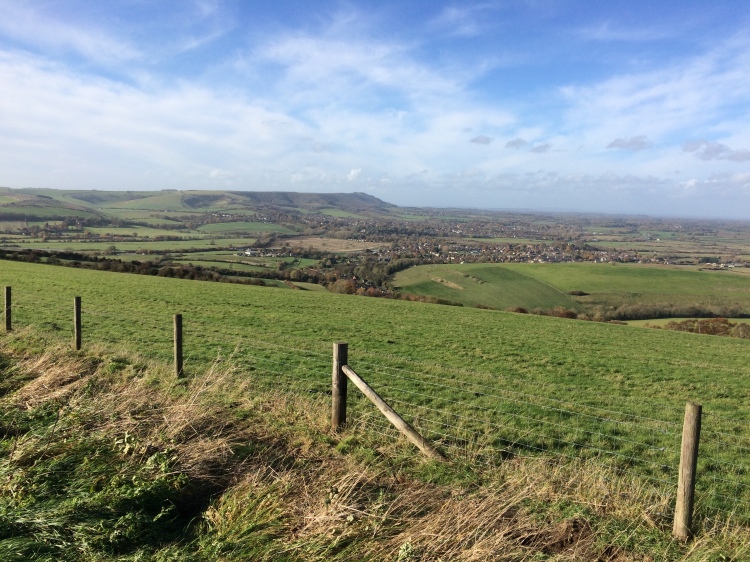 The path flattens out and joins a paved road up as far as Truleigh Hill youth hostel. The cyclist passes me with a “hello again”, and pootles off into the distance. The bastard.

From the top of the hill, there are fine views over grassy valleys to the south, the downland and the sea shining in the autumnal sun in the distance. A crow beats its wings into the wind, making a lot of effort to stand exactly still. A single tree, bent over like an old man, makes obvious the prevailing wind.

I stop for lunch at Fulking escarpment, as it seems a fulking good place for a sausage roll. Also, the slope affords me a bit of shelter from the wind. I fulking love a good escarpment, me. 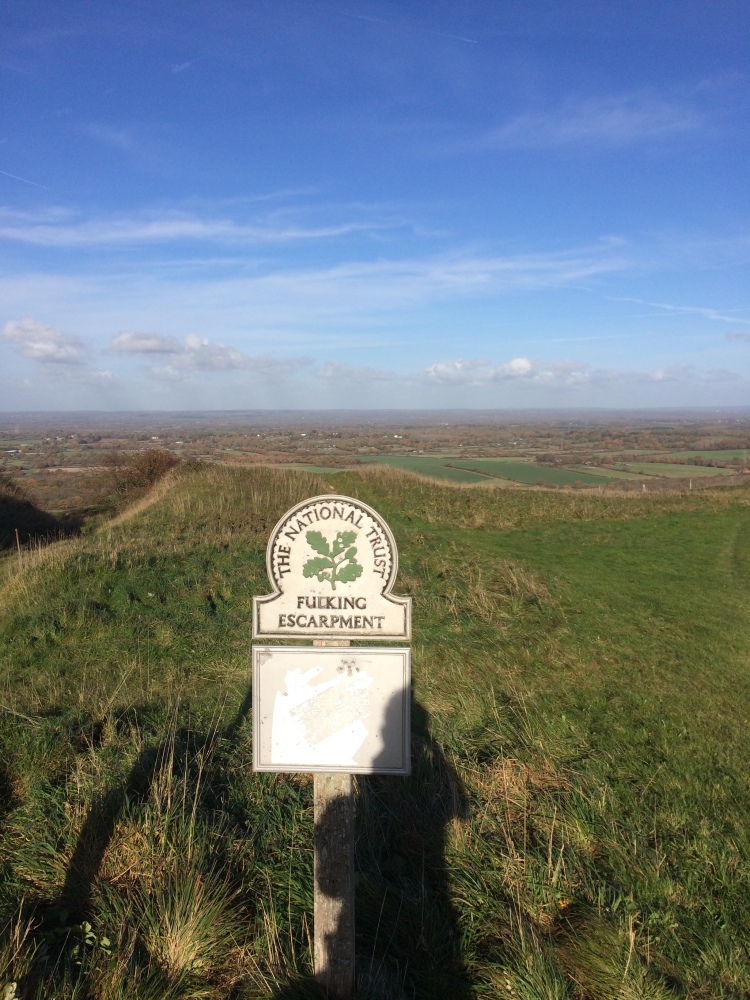 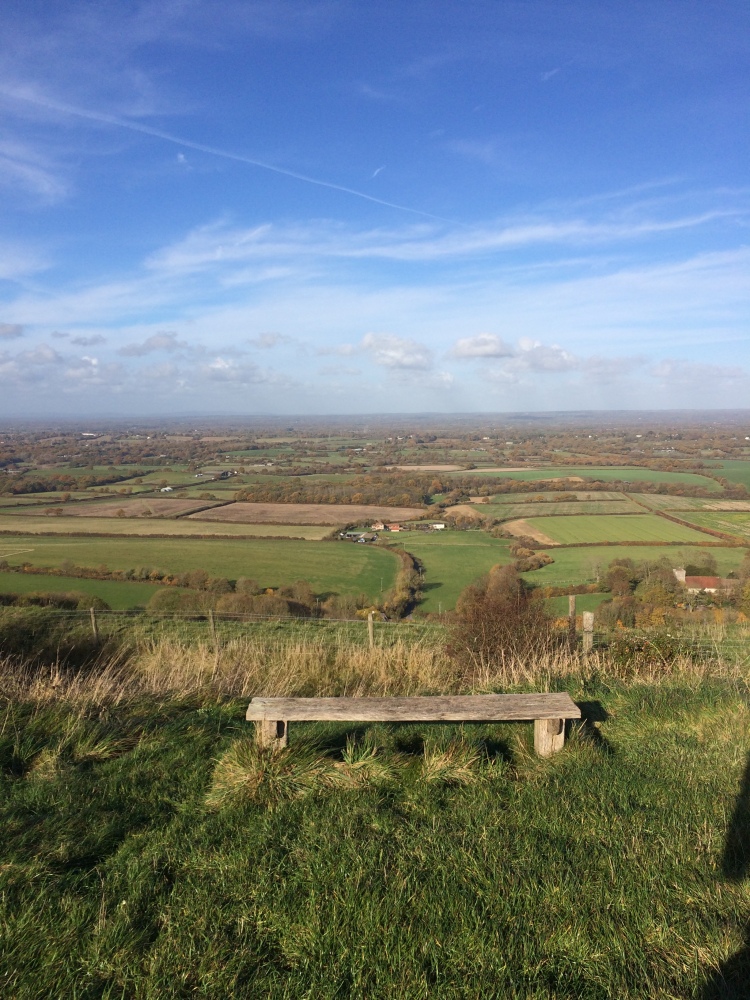 From here, I passed a lot of joggers. Joggers! Making a mockery of my efforts! But the walk soon took me toward Devil’s Dyke, “a spectacular dry valley said to be carved out by Satan himself in order to let the sea flood over the lowland Weald and destroy all the churches”*.

The top has a car park and a crap pub, which looks on its last legs. But there are many dogs to admire and pet, which was a nice change of pace after the windswept, exposed solitary miles. As always with this walks, a car park = a sudden burst of activity. And then the walk continues, and the humans (and dogs) vanish.

Crossing the A281, I pass Saddlescombe farm, with its (closed, out-of-season) teashop and donkey wheel, which I understand is one of the last examples of a donkey wheel used to pump water from the well. If you’re into that kind of thing.

Climbing back up onto the hilltop, I pass several cows then confuse four artfully positioned sheep for a stone circle. From this hill, there are good views towards Brighton, and the fading autumnal sun stretches my lanky shadow to ludicrous lengths.

By this point, the thunder of the A23 is inescapable, and I feel sorry for my end point village of Pyecombe, which must have been a beautiful spot before the dual carriageway came. Its church has a tea and coffee point for walkers, a really lovely touch of community spirit, despite the lack of humans. I write a message in the guidebook, making a pagan prayer for the demise of the internal combustion engine.

I got lucky with buses and quickly made it back to Brighton, where I sit, content with a stout in a pub named after the exploits of Brunel, awaiting an old friend.

* shout out to Jim Manthorpe, whose excellent trailblazer guide to the South Downs way I quote from here