There’s an excellent docklands museum, an offshoot of the museum of London. In it you learn the locals fought against Thatcher’s privatisation and “redevelopment” of their home as much as they could.

They lost, and now Canary Wharf is a shiny tribute to public money paying for private gain, a place of multinational banks, chain restaurants, private security dressed up to look a bit like the met police, and blanket CCTV keeping an eye on empty plazas. Signs everywhere remind you this is private land. For the right to protest, you’ll have to go somewhere else.

We had started our walk from Limehouse, and if you walk south along the river, you eventually reach the point where the area we think of as “Canary Wharf” ends and the rest of the isle of dogs begins. I followed the river path, and soon I was in Millwall. Now there is a name with many connotations.

We headed inland to explore, first leaving the shore to take a look at an old pub turned Indian restaurant. The name was still carved into some of the building’s stonework: the Blacksmith’s Arms. A beerhouse that opened in 1895. Still had a pub football team as recently as the 1980s. Now a single Victorian building surrounded by flimsy new-builds, like the apartment block in Batteries Not Included.

We walked back to the river, passing some Polish gentlemen enjoying some relaxing tins of Stella by the entrance to an ex-pier.

From Sir John McDougal Gardens we headed back inland, over a concrete footbridge to a postwar shopping precinct. And immediately relaxed: away from the apartment blocks and luxury marketing suites, here was a recognisable and familiar landscape. A chicken shop, a community centre. Even a 1970s estate pub, the Tooke Arms, which still – just – seems to be operating*. 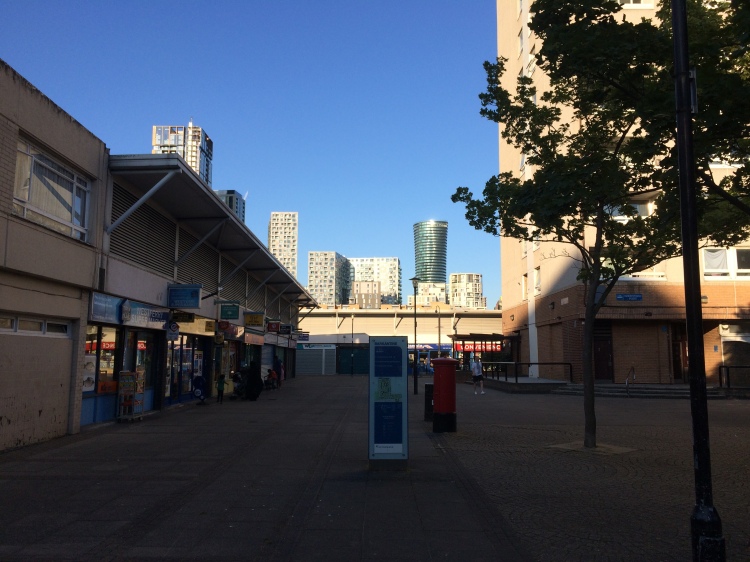 From here we walked in the direction of Millwall Inner Dock, past more good quality 20th century council housing and, unexpectedly, one surviving road of Victorian terraced housing.

Millwall inner dock itself was a good spot to enjoy the contrast between the community feel of the streets and estates we’d walked through, with kids playing football and locals hanging out chatting on street corners, with the ever-encroaching tide of shiny, often half-empty towers and empty, windswept plazas and private lawns. Standing, as I was, between from where we have come and where we seem to be going, I know which I prefer.

* This pub was rebuilt in 1970 and has been around in previous form since the 19th century. For excellent histories and images of all the isle of dog pubs, look no further than this blog post