After spending an enjoyable few hours in the non-place of Ataturk international airport, I headed on to the second, longer leg of my trip: an eleven hour flight to Tokyo’s Narita airport. The trip was uneventful: I got some sleep, some Japanese art students tried to teach me some useful words of Japanese (“this means sorry, like sorry, not sorry, like excuse me”), and I swapped seats with a lovely Turkish family so a delightful toddler called Emilia could hang out with her parents rather than me. Although she did spend quite a lot of time hanging out with me. She particularly liked handing me screwed-up bits of paper. Emilia, I will treasure them forever. Have a wonderful life.

I arrived in Tokyo in the evening, via a coach which, miraculously, dropped us off directly outside our hotel (thanks, Yuki, you necromancer). I was asleep for most of the journey but it was interesting to approach the city by road instead of rail: from a few days’ distance, all I can remember are twisting motorway flyovers, all waiting for nuclear war and the wild motorbike gangs of Neo Tokyo*.

Next to our hotel was a traditional British pub called the Rose & Crown. As the blurb printed on the window explained, “the adult space doesn’t affect extends when it sets foot on the corner of the skyscraper in the store profound. The name of an English national flower and incline the crown rose beer, and enjoy, talk about the life with the joke, and an important person while tasting the roast beef called the representative of the British home dish. It is time of bliss that feels an adult pleasantness.”

Which makes a lot more sense than if you were to ask a British publican to describe the appeal of an izakaya. In Japanese.

We put some coins into a machine and exchanged a ticket for some ramen. It was time to sleep. Kyoto in the morning. 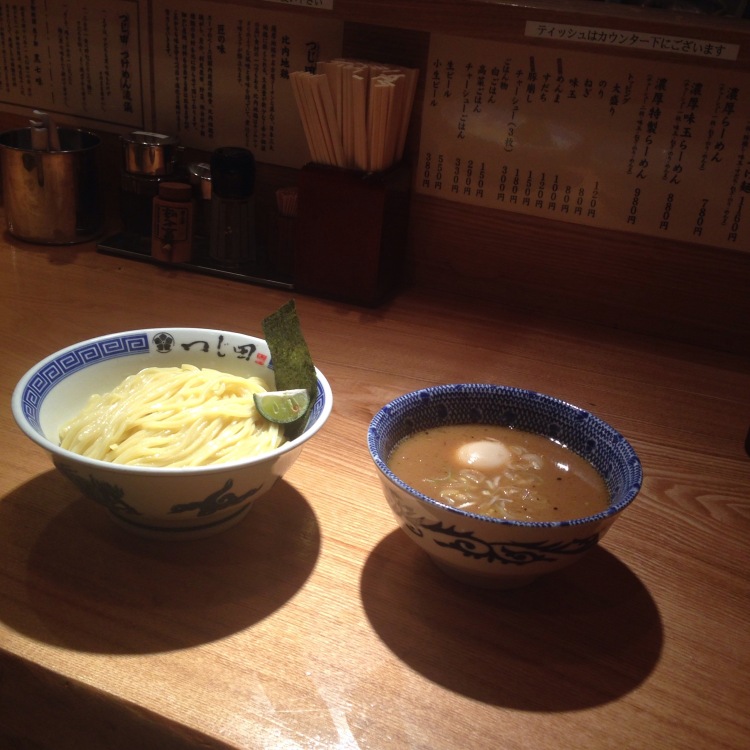 My friend Russell once wrote a concept album about “the main modes of transport”. The ones I can remember: stallion, 16 wheeler truck, and bullet train. “Bullet train, bullet train, take away the pain,” it went. “The song isn’t really about the bullet train,” he explained.

The Shinkansen is my favourite way to travel, even more than by stallion, so Thursday morning saw us board the 7:59 train to Kyoto. We had snacks (I was greedy and got a hefty ekiben), we had drinks. We had a long journey ahead of us. This was the ‘slow’ shinkansen, but it still seemed pretty quick to me. The girls sat in front of us had matching bows in their hair. I read a beautifully cliched detective novel called “Death under Sail”, fell asleep a lot, and peered out the window at Mount Fuji, a mountain I should probably get around to climbing one day.

Kyoto! After dropping our stuff at the awesome arty hotel Yuki had suggested, we got the subway downtown and walked past some people protesting against the proposed changes to Japan’s pacifist constitution. We went to a restaurant called “Spice Chamber” for keema curry. They had a wonderful music collection and David Bowie was there in pictoral form. From here we went to a wonderful goth cafe for fruit punch. The waitress’ style icon was probably Wednesday Adams. It was a magnificently odd place, cold and dark and austere and brooding. I had ice cream.

We then walked up Fushimi Inari shrine and its hill of torii gates. Because it’s important to do *some* tourism.

In the evening we had dinner at a Korean restaurant by the Kamo river. In the summer, the restaurants construct wooden platforms out back so you can eat outside overlooking the river, maybe see some ducks. It was, though, raining. We ate inside. Behind us were some extremely well behaved Dutch tourists. 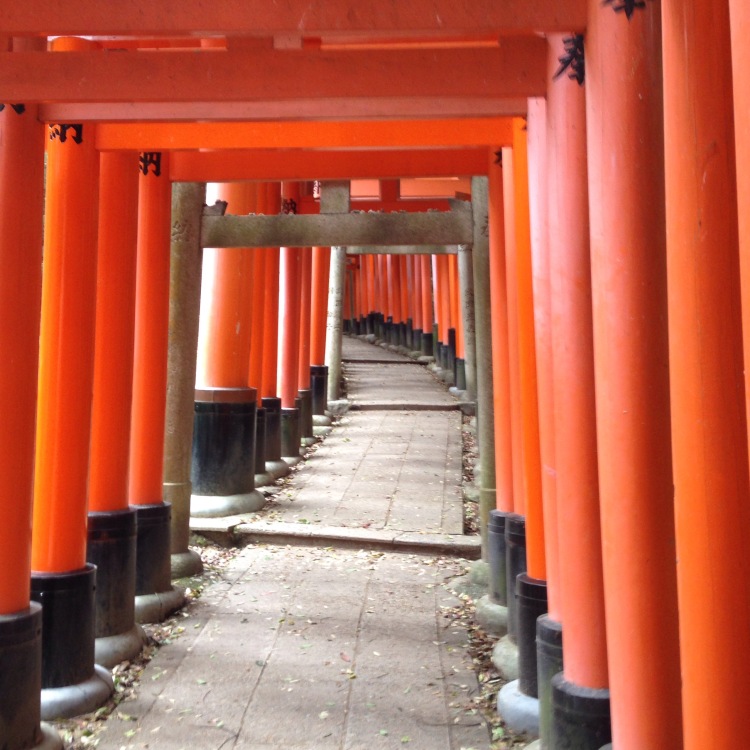 Kyoto is a city that makes most sense by bike. It’s small enough and beautifully contained by its surrounding hills, so it’s perfect for pedalling. We cycled along the Kamo river and I got over-excited by Tatami Galaxy nerdery, as outlined here. We watched a parade heading over the river with horses and strange lanterns. It was the Aoi festival, we discovered, thanks to some quick googling. We had lunch among ladies who lunch at a vegetarian restaurant by Kyoto university, and then cycled up alongside the Philosopher’s Path, a hillside walk named after some 19th century sensei. We visited some good bookshops: I now have a guide to the best train journeys of Britain from 1984. In Japanese. Will surely prove to be very useful indeed.

We then went to a lovely old wooden house, as recommended by Yuki’s book, New Kyoto. In it were various artists and designers, who had each rented a space in the gorgeous place. One of them, it turned out, was a massive indiepop fan, and had designed Veronica Falls bags. We got talking – and talking. It turned out she was friends with my ex-wife, who had visited Japan a few months before. It’s a tiny world, getting smaller all the time.

After the slight awkwardness of the above conversation, I lost track of time, and we faced a rush to go back to the hotel and then back to the station in time for our train. We managed it pretty well. Bikes are magnificent machines. 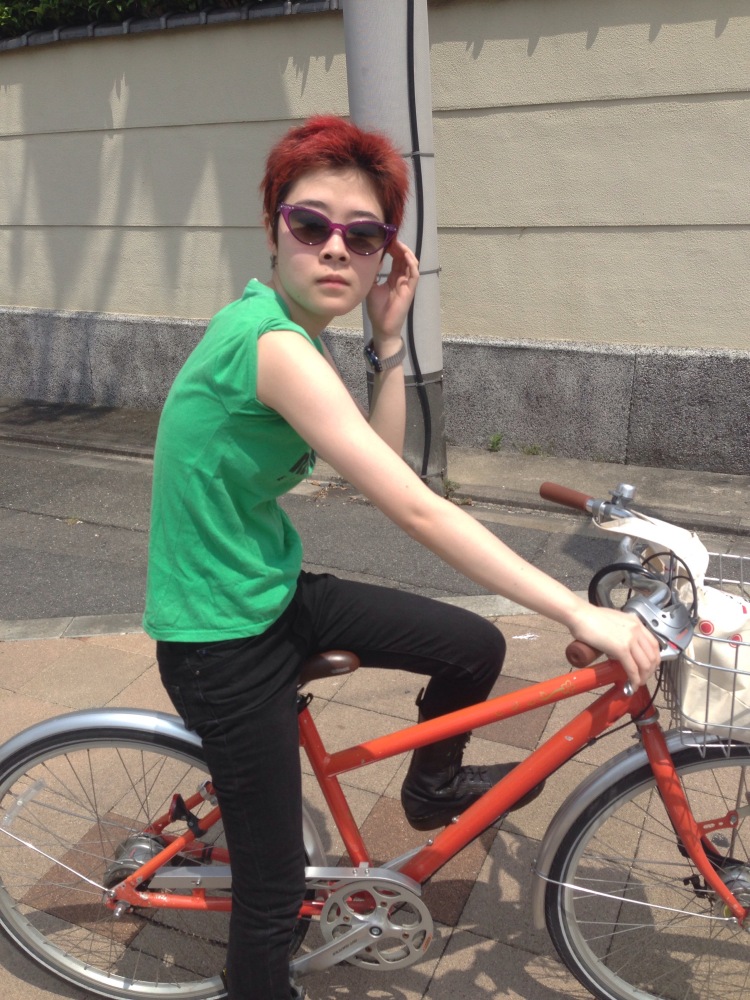 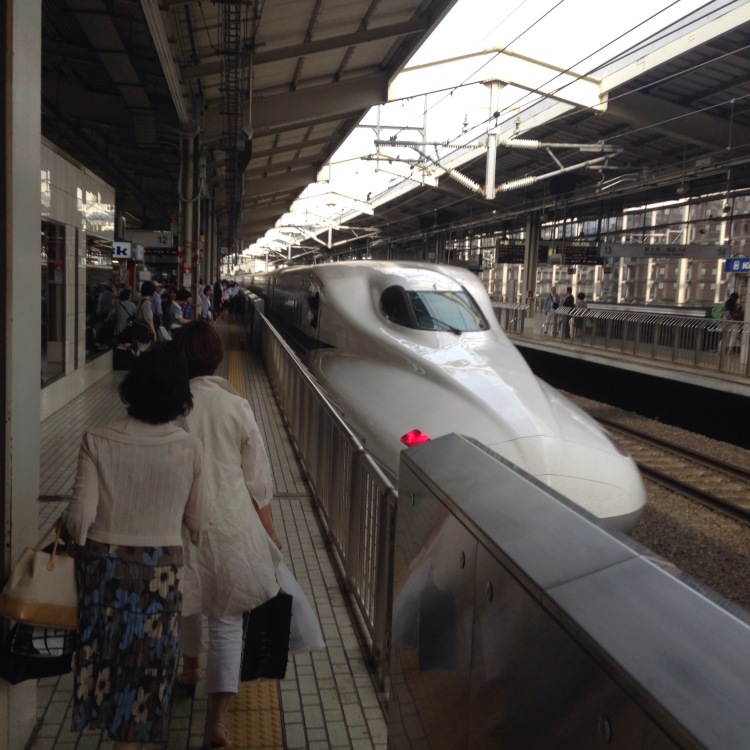 * It’s impossible to overstate how much my interactions with Tokyo have been shaped by manga and anime.